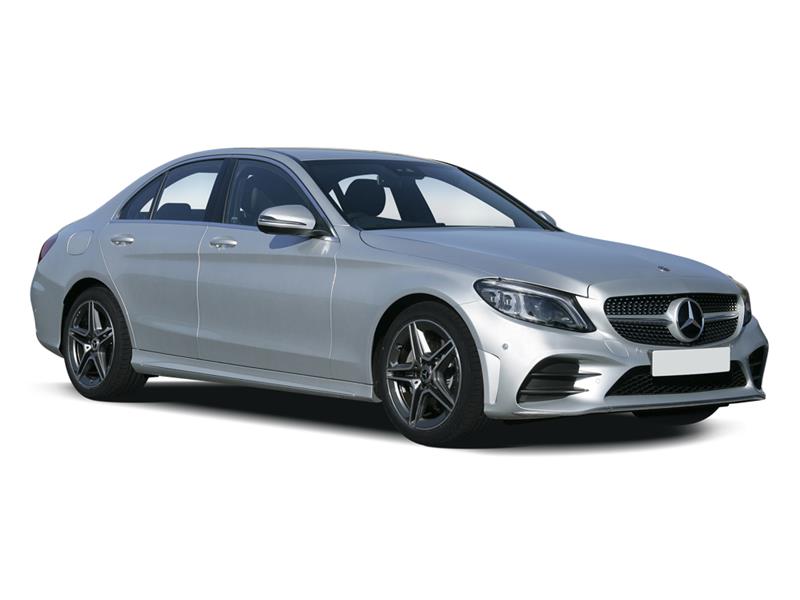 Thinking of a German mid-sized premium badged saloon or estate? If so, then your options have always been pretty straightforward; the dynamic drive of a BMW 3 Series, the uber-cool technology of an Audi A4 or the aspirational image of a Mercedes C-Class. With this fifth generation 'C' though, Mercedes wants to offer more; a sharper drive to temp BMW folk; and a big enough step forward in technology and efficiency to make a potential Audi customer think again. We've heard this before down the decades of course, since the first generation 'W202'-series C-Class was first introduced back in 1993. Particularly with this MK5 model's 'W205'-series predecessor, launched in 2014 which went on to sell 2.5 million units. But there are strong grounds for Mercedes' claims for conquest business this time round. Under the skin, many aspects of its updated 'MRA' ('Mercedes Rear Architecture') platform are shared with the latest S-Class - as is much else. The aim is to redefine what 'luxury' means in this segment. Sounds promising. Let's take a look.

There's quite a change here. This latest C-Class is powered only by electrified four cylinder powerplants - yes, right up to the top C 63 AMG variant. The mainstream engines have mild hybrid tech, with pricier plug-in options if you want them. The entry petrol model is the C200, which has a 1.5-litre unit offering 204hp. Next up is the 2.0-litre C300 with 258hp. Mercedes hasn't abandoned diesel either. There are three options, all of which use a revised 2.0-litre unit, which now gets an extra 42cc of capacity. The C220d has 200hp and the top C300d has 265hp. All C-Class models have to be had with 9-speed automatic transmission. We mentioned plug-in options, said by Mercedes to be 'significantly more electric' - and so it proves. Courtesy of a much larger 25kWh battery pack beneath the boot floor, the C300e petrol PHEV manages between 34 and 62 miles of all-electric driving range. It's also pretty quick, courtesy of a combined 304hp output and can drive in all-electric mode at up to 87mph. Mercedes has engineered the usual flagship high performance AMG models to complete the range.

From the front end, the design cues echo those introduced with the facelifted E-Class, particularly the grille and the full-LED headlight arrangement. This 'C' has moved closer in size to an 'E' too, being 65mm longer and 10mm wider, though the roof line has fallen by 7mm. Key aesthetic features include the smart bonnet with its twin power bulges and the stronger shoulder line which flows into a neat boot lid that's flanked by angular LED tail lights and which features a subtle integrated spoiler. The previous generation C-Class was heavily influenced by the larger S-Class model, as is this 'W206'-series model - and you notice that most of all inside. A huge portrait-style touchscreen now dominates the centre stack, with three 'jet engine'-style circular vents just above and single vents at either end of the dash. That screen is a real cabin talking point, as is the fact that for the first time in a C-Class, the instrumentation is all fully digital. A 'floating' 10.25-inch digital instrument panel takes the place of the previous more conventional binnacle, with a larger 12.3-inch screen available as an option. Either way, you can customise the display via three 'themes' - 'Discreet', 'Sport' and 'Classic'. Media connectivity takes a big step forward via a second generation version of the MBUX infotainment system. This features over-the-air updates - and live streaming services have been added so that owners can link accounts to services like Spotify and access them in the car. Space in the rear is slightly improved by the 25mm wheelbase length increase, but it's still comfortable for two but a squash for three. Out back, the 455-litre boot capacity is competitive in the saloon but if you prioritise that, you'll want the Estate variant. Its automatic tailgate rises to reveal 490-litres of luggage room, 30-litres more than before. With the seats folded, that rises to 1,510-litres.

Prices are a little above those of the previous generation model, which means a starting point of around £39,000 for the entry-level C200 'Sport' saloon. Whatever model you're looking at, allow a premium of around £1.600 if you want the estate version. The initial range-topping variant, the C300d 'AMG Line Premium' variant, costs from just over £52,000 in saloon form - or from around £53,500 as an estate. Base 'Sport' trim includes the latest generation MBUX media system, including a high-resolution 11.9-inch central media display with its 'Hey Mercedes' virtual assistant. Plus there's a 12.3-inch digital driver display, 17-inch five-spoke alloy wheels, LED high performance headlights with Adaptive Highbeam Assist, a Parking package with reversing camera, heated front seats and wireless smartphone charging. Next up is 'AMG Line' trim. With that, you get 18-inch AMG 5-spoke design alloy wheels, privacy glass, AMG bodystyling, a multifunction sports steering wheel finished in nappa leather and visible twin exhaust pipes. If you want to go further, the 'Premium' equipment line features 19-inch AMG multi-spoke alloy wheels, Adaptive Highbeam Assist Plus, ambient lighting, illuminated door sills, KEYLESS GO comfort access, MBUX augmented reality for navigation and a 360-degree surround view camera. Finally, 'Premium Plus' trim adds 19-inch AMG five-double-spoke alloy wheels, a panoramic sliding sunroof, a head-up display and Thermotronic four-zone automatic climate control.

There's the potential for quite a shift here in the segment hierarchy for mid-sized premium badged saloons and estates. To be frank, in its previous guises, the C-Class was a car you usually chose more because it was a Mercedes than because it was intrinsically better than its Audi A4 and BMW 3 Series arch-rivals. But this fifth generation 'C' could potentially tempt you on grounds other than mere badge equity. It now has the segment's classiest and most sophisticated cabin. We also think it has the best interior media set-up. And when it comes to issues of ride and refinement - the things that really matter to potential business customers - there's the potential for class-leading drive dynamics too. The other thing that really matters to those customers is running cost efficiency; well, this Mercedes is class-leading there too. If you're in the market for a car of this kind, that all makes this 'C' a compelling proposition. It'll be interesting to see how BMW and Audi fight back.